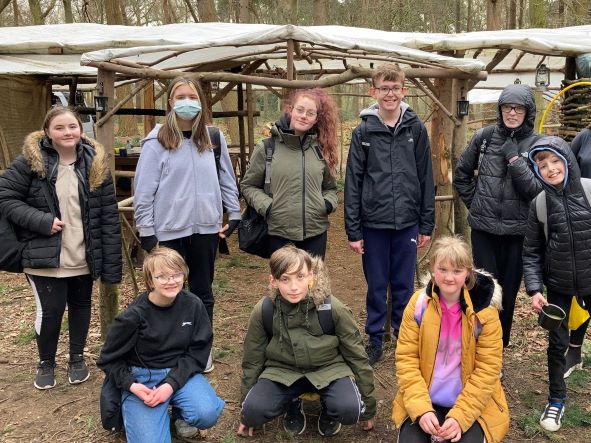 Step out of your comfort zone and into the woods! Read all about our Regional Manager Chloe’s latest Blue Skies adventure in Norfolk:

You might think we’re only about STEM at JET, but you’d be wrong! An important element of almost all our Blue Skies syllabuses is encouraging our students to test their mettle in an outdoor environment; whether climbing high wires in Lincoln, forest school foraging in Farringdon or – as happened here in Norfolk earlier this month – campfires and slacklining in King’s Lynn! Our young people benefit from these experiences is so many ways, not least, testing their teamwork skills in unfamiliar and often unpredictable environments.

Our latest JET session in the great outdoors came courtesy of a new partner for us here in Norfolk; Inside Out Education.  The trip was a culmination of a 5-session Blue Skies Inspire Package (BSIP) for local Yr8 students, and was a huge hit.

On arrival, Nathan, our leader for the day from Inside Out Education, informed us that “the compostable toilets are the closest you will get to being indoors!”. With little protection from the March wind, standing around would have quickly made us cold, so we began by playing a fast-paced, tag-rugby-inspired game which soon had us abandoning winter coats on the forest floor.

The first real challenge of the day came when the students were told they would need to light the fires on which they would cook their lunch. After foraging for firewood, twigs, and some highly flammable silver birch bark, it was game on!

Using a ferro rod and striker, every student was able to make the sparks to produce a smouldering fire. One student was initially scared, but soon conquered his fear when he saw that – when respected and treated as a tool – the fire was safe. As soon as the flames began to flicker, tummies began to rumble… nothing that upside down pizzas wouldn’t fix! And to top it off, gooey, chocolatey s’mores stuffed inside an ice cream cone.

Refuelled after lunch, the students were eager to tackle their next challenge and a slackline was pitched between two trees, spanning about 10m. After a few attempts, the fastest student to cross the gulf took only 15 seconds!

Then onto one of the highlights of the day… primitive tools! The students were taught how to throw a spear, and then foraged to find small pebbles which were to become their ammunition for slingshots. Students were particularly pleased with themselves when, moments after firing the slingshot, they heard the satisfying “ping” of a pebble hitting the target.

Throughout the day, we were taught how to make a fire and cook on it safely, how to cross a slackline, and how to get the most out of our primitive tools. As ever, the biggest lesson of the day was our JET takeaway, that even if you don’t succeed the first time (because you held the striker at the wrong angle to make sparks, or slipped off the slackline, or missed the target), you will improve every time you give it a go; the most important thing is not to give up! That is what the Jon Egging Trust is all about. The students have been working on their teamwork, communication and resilience skills during their in-school sessions with JET, and this trip gave them the opportunity to see how those skills can be put to use in real life. I am so grateful to have been able to give these incredible young people a day to remember, and it’s certainly one I won’t forget for a long time either.