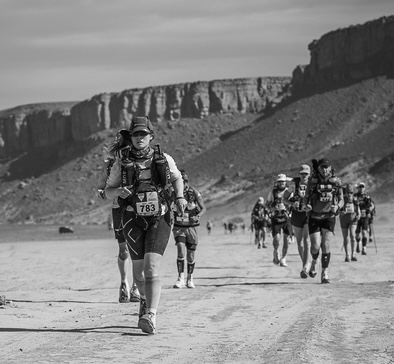 Jane Mason has raised almost £1,700 for JET by completed the gruelling Marathon des Sables; six marathons in six days across the Sahara Desert. Billed as the toughest endurance race on earth, we caught up with Jane to find out how she got on.

So, how did the first day go?

The strangest part was not knowing anyone when we arrived; we were bussed into the desert in the middle of nowhere and then left to drag our bags and suitcases through the sand to our allocated tents. I was pretty apprehensive at that stage, hoping that we’d all gel as tent mates.

But honestly, the people in my tent were incredible, and it’s the people you meet along the journey that makes Marathon des Sables such an incredibly special experience.

You met people on the journey out to the desert who hadn’t completed MDS on previous attempts; it must have ramped up the pressure hearing their stories that first day?

Yeah, their stories definitely got the nerves jangling – especially when you’re hearing how tough it’s going to be from lots of experienced runners who’ve done so much training. It makes you realise what you’re up against. What was interesting though was that it was never due to people giving up – it was always due to circumstances outside their control that caused an early finish. That really made me focus on ‘what can I do to give me the best possible chance of crossing the finish line?’

I made a point of taking foot care and salt intake seriously from the start. I got at least one or two nasty blisters each day and knew they could end my race, so I made sure I went to the foot doctor – ‘Doc Trotters’ – at the end of every day to get them treated, rather than just trying to tough it out.

Every morning at the start line, there was the daily race briefing from the top of a Land Rover and then the organisers would blast out ‘Highway to Hell’! It was one of those unifying moments when we’d all sing along together; it made me feel part of something so much bigger than myself – I’ll never forget that extraordinary feeling. One day someone even jumped onto the Land Rover to propose to their partner!

Was the desert terrain what you expected?

Honestly, no! I’d expected sandy and gravelly terrain, but it was totally different to what I thought actually running across it. Sometimes the ground would feel like dried up earth which bounced when you ran across it, and I could get some speed up! Other times it was like running in quicksand. But it was the climbs which were the biggest surprise – they were steeper than I’d ever imagined; these massive inclines with rocks so big you actually needed a rope to descend!

The sand mountains, as I called them, were definitely the toughest part; often you’d be climbing for what felt like hours under the sheer heat of the sun. You could feel it beating down, and you’d feel so thirsty and wouldn’t be sweating. That – along with the blisters – was the biggest worry for being medically withdrawn – it was so vital to keep salt levels up, so I made a point of taking on salt every time I approached an incline to prevent dehydration.

You must have felt isolated running across a desert?

Yes and no – it sounds silly, but I did not fully appreciate how vast the desert would feel. The uneven terrain meant you still had to concentrate and couldn’t drift into your thoughts too much, as the risk of falling and twisting an ankle was high. In fact, I don’t think I have ever concentrated so much on the terrain whilst running!

Were there any low points?

By day five I had a double blister on my big toe. The doc wanted to treat it, but bursting it meant risk of infection and by that point I just wanted to finish. So, we patched it up and I ran on it, which was incredibly painful. By that stage too my body was suffering; nothing can prepare you for running six marathons across desert terrain in searing heat. I started to feel pretty ill that day, but I was so close to finishing – and yet still so far away. That was a definite low point for me, but all I could focus on was completing, nothing else mattered.

And how about sandstorms – did you face any?

They were like nothing I’ve ever experienced! They were exhausting, not just from trying to keep running and staying on track, but because of the constant whipping of sand on your face and legs and arms – they felt like they went on forever. And you’d struggle to breathe too because the sand gets in your mouth and eyes and nose, and you’d pull up your buff to try and protect your face but then that restricts your breathing even more. No matter how much you cover your face the sand gets in and it makes you so thirsty.

When the storms started that’s when I began – not hallucinating – but constantly thinking about orange juice with ice cubes! I obsessed over it; it was all I thought of and talked about!

And did you get your orange with ice cubes when you finished?

Yes! I got five when I finished, one after the other, and they tasted amazing!

Did running for JET give you extra motivation?

There were so many points where I thought about JET. During the sand mountains which were so rocky and technical; when I was climbing those, feeling like I wasn’t making progress, I’d think about JET and took inspiration from that.

I also thought of JET on an overnight run when we started at about 9am one day and didn’t finish until 5am the next. The final part of that day felt everlasting! I could see the end in sight, but it was still so far away. It was at that point I’d think of JET and the people you support and knew I had to keep going.

What you think might be impossible – with the right support and with belief, it’s not! I find it amazing how far my body was pushed, and I still can’t believe that I did it – and I’m not even a serious runner! It’s incredible what you can achieve – even when you believe you can’t – if you just keep going.

And are you still running?

Haha, well I just did a 10k on Monday so yes! Oh – and I’ve signed up for an ultramarathon at the end of this year!

Wow! A huge thank you to Jane who proves that there are no limits on what we can achieve with the right preparation, mind-set, and support. To donate to Jane’s fundraising page, please visit:

JETting off to the toughest footrace on earth | Jon Egging Trust